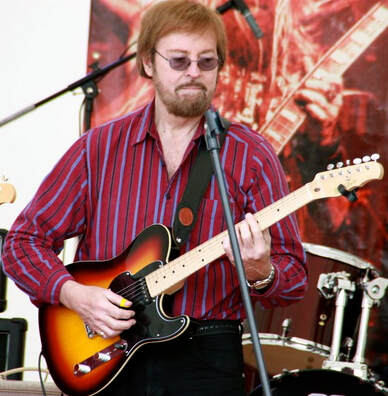 “Bend Master of the Telecaster.” –  That’s the moniker bestowed upon Jerry Donahue by those fortunate enough to have witnessed first-hand his truly amazing and almost freakish electric guitar technique.  As both a soloist and as one third of that hellish troika de-twang, The Hellecasters, Jerry has been exhilarating country, folk, blues and rock audiences for nearly 5 decades.

Though born in New York City, Jerry grew up in Hollywood and began playing piano before shifting his focus to the guitar as a young boy. His passion for the instrument became evident as he eagerly absorbed the musical influences of the day — from Duane Eddy to The Ventures to Chet Atkins.  Moving to England at age 16, Jerry combined the Celtic folk music of his adopted home with his American rock and country roots to create a hybrid sound that was uniquely his own. In his early 20s, he was asked to audition for a band with Sandy Denny & Trevor Lucas, who fell in love with his style and together they became known as Fotheringay. In 1972, when Richard Thompson left Fairport Convention, Jerry stepped in and continued writing, recording, and performing with some of his favorite musicians.

In the 1990s, Jerry received widespread acclaim for his work as a member of The Hellecasters guitar trio.  Along with John Jorgenson and Will Ray, Jerry and the Hellecasters brewed up a lethal mix of some of the most astounding instrumental guitar music ever!  In 1994, Guitar Shop magazine named Return Of The Hellecasters “Guitar Album Of The Year” and described Jerry’s string-bending technique as that which could only be accomplished by a “four-armed pedal steeler”.  In 1998, Jerry re-released his 1986 cult favorite solo debut, Telecasting Recast.  This revamped, renewed and upgraded version featured enhanced percussion, bass, acoustic guitars, live drummers, and higher production values.

In 2008, Jerry found the material Fotheringay had began recording for their second album but never had the chance to release before disbanding. He produced and released it with great success and even began touring again with original members, Pat Donaldson & Gerry Conway, along with an incredibly talented string of guests.

He even formed a band with other folk “legends” and – along with his daughter, Kristina – they recorded an album as The Gathering and toured the U.K. and Germany. Both as a soloist and as a Hellecaster, Jerry is a perennial Guitar Player magazine Reader’s Poll winner in the Best Country Guitarist category.

Jerry is battling the effects of a recent massive stroke. Financial resources are needed for our good friend’s care. Please donate to the Jerry Donahue Fund today.
Donate Now
How To Help
To donate online click the DONATE NOW button above.

To donate by check:
Write check to:
Jerry Donahue Fund at Sweet Relief