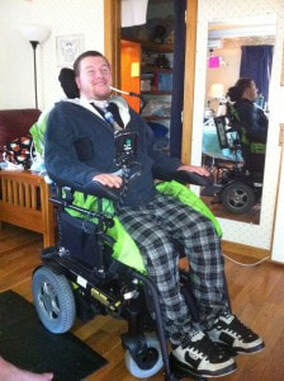 2012 - UPDATE
When they discharged Jes from the hospital, they told us he’d always have to wear his neck brace. He no longer wears the neck brace and is able to lift his head and his elbows up in the arm of his chair about 1/8″!

Jesse said “Mom, look at my elbow”. He was sitting in his chair at the time and has had a pressure sore that continually stays in the healing stage on his right elbow. Not bad, since it’s the only one on his whole body. So I said, there’s a bandaid on your elbow so I can’t see it. And he said, “No mom, just look at my elbow, watch my elbow.” So I bent down and looked carefully and saw it move up 1/8″ I was so happy!! I said, “Wow Dude! You did it….You moved it!! Do the other one!” Sure enough the other one moved too!! We high-fived it in celebrating the moment and Jesse looked at me and said with such confidence…”might not takes as long as we think!” His doctors are amazed at his current state of health. Most in Jesse’s condition suffer a lot with bladder and lung infections. Jes has done very well and has only had a couple times of having to go on antibiotics. Every day we are amazed at his optimism and how he continues to see the good in his current state.

We’ve spent the better part of the last year working with a company who is building Jesse’s new chair. What normally takes three months to build has taken over a year, thanks to lots of red tape. They built it taking into consideration the terrane we live in…dirt, sand, hills, woods….not like getting around downtown if you know what I mean. He is so excited to be able to really get around outdoors. Jes has always been an outdoor guy and has missed being in the woods. Now with this new chair he can get out there on the two tracks and be in the woods. He and his buddy Tony, who lives on the back side of our property, go out and build a fire and throw their cans of soup in and hang in the woods. Something they’ve done for a long time, even in the winter time they would snowshoe and meet up in the woods and build their fire and hang out. Summer time they would sleep out under the stars. The only problem with this chair is he can’t get into the van we already have which is a 1993 Chevy and he can’t minover in the house with it. It’s rear wheel and the turn radius requires much more room than the old chair. This one was built more for him to be able to get out of the house around here. We’re working on these issues. Thankfully we still have the old chair so he can go to town and get around in the house.Thanksgiving 2011….our first one together with our three kids and grandkids in 7 years since Joseph moved to Texas. It was awesome! It was so nice to have everyone together for that week. We were long overdue to just hang with each other. Uncle Jesse would always give his niece and nephew piggyback rides so the tradition continued with wheelchair rides.

Christmas is now upon us and to date Jes had made even more progress….He has total control of his neck which continues to get amazingly stronger. When he lifts his head he now has muscle movement all the way down to his ribcage!! This is big! There was no movement past his collarbone! He’s also noticing pain from muscle spasms deeper into his back along the spine. It’s very painful and yet a good sign. We have continued to look into getting some assistance in his healing process but no leads yet. Just received some info on a place in California that we will look into. Jesse’s attitude continues to be positive and his sights are set on returning to a normal life. We so admire his courage and determination. I know by now many of you have heard that Jes is in love…with his night nurse Rachael.

Rachael takes such good care of him and spoils the dickens out of him. She’s a go-getter and not much gets in her way. She packs him up at all hours of the night because Jes is a night owl, like his dad. He sleeps in the morning till early afternoon and then goes to bed anywhere between 3 & 7AM. So when he gets the itch Rachael packs him up and off they go. He’s able to get into a couple of his friends houses and Rachael’s apartment. His old pal Tony works with him two and a half days a week. We trained Tony on how to take care of Jes and Tony puts in 22 hrs a week with a program called “Self Determination Program”. The state encourages people in Jesse’s condition to continue to better their situation. When they see your serious their willing to work with you. So Tony comes and takes Jes out. They go to town, to the movies, shopping and even back in the woods continuing their ritual of building campfires and cooking something to eat while they just hang tight. Jes is doing well with integrating himself back into society. From all over the world letters and cards and financial help have come to Jesse. As a whole it’s a kind world and there are a lot of great people out there. Many of you are such an inspiration to us and Jesse is amazed by your love. Here’s note to you all from Jes… Thank-you all…from the four corners of the earth for your Love, Prayers, Generosity and Continued Support for Our Family… Our Love to You Always. We wish you a new year full of peace, love, laughter, family and friends!

A MESSAGE FROM JESSE

Dear Friends and Family:
First and foremost I would like to Thank you all for your loving support and generous donations. Without you guys I wouldn’t be where I am today. A lot has been happening for me lately, both health and socially. I have been home for over a year now and am doing great. Progress is being made and I keep getting better and better. A year ago, last November, I quit wearing my neck brace. Since then my neck muscles have gotten stronger and mobility has increased significantly. Also, we are noticing muscle contractions all the way down my arms to my hands. I am now able to lift my elbows off the arm rest of my chair and feeling is moving further down my shoulders. So far I have stayed healthy since being home.

This past summer was definitely a blast. I was finally able to have freedom in using my van and used it almost every day. I also spent weekends at Bay Harbor Boat and Car shows with my family and friends. BBQ’s, bonfires and late nights defined my summer. Near the end of the summer I began work on my van stereo system. I’m still currently working on a competition stereo system that I plan on competing with statewide this summer. I went from a blown speaker in the driver’s door and stock radio to a system which includes a JVC head-unit cooled by a high powered stringer fan running three fully digital 1200 watt Memphis amplifiers, one- four channel digital Memphis amplifier, one Memphis line driver, two 1500 V-Max dry cell competition charger tanks and that all runs…four 8″ Pyle midranges, two 5¼” pyle mids, two four inch pyle mids, 4- 6×9″ pyle mids, two infinity Kappa perfect 12 ” subwoofers, two 12″ infinity Kappa subwoofers, two L7 kicker solo-baric 15″ subwoofers and an array of neon and LED blue lights. This system is continually changing and progressing. Currently my van is in the shop getting extensive work done to it. Naturally I feeling lost without it. Once again, I’d like to Thank-you all for our love and support and donations, all of which make my life easier and happier.

Donate Now
How To Help
To donate online click the DONATE NOW button above.

To donate by check:
Write check to:
Jesse Farner Fund at Sweet Relief